An in-depth analysis of the 2022 Emilia Romagna GP

Thanks to Versor, the official AI partner of the Australian Grand Prix.

Max Verstappen claimed an emphatic victory in the fourth round of the season at the Emilia Romagna Grand Prix in Imola, Italy, leading from start to finish with an immaculate drive in the wet.

The weekend was hugely successful for Verstappen as he also claimed the 8 points available for winning the Sprint Race appetizer, and the extra point for the fastest lap, effectively halving Charles Leclerc’s championship advantage to just 27 points. Leclerc could only manage 6th place after a late spin when challenging the second-placed Sergio Perez cost him 3 places, leaving the Red Bulls to claim 1st and 2nd places with Lando Norris taking the final spot on the podium.

Ferrari was the only team really capable of challenging Red Bull’s dominance; Red Bull’s performance advantage over the rest of the field clearly visible in qualifying and over the Sprint Race. The Sprint Races are effectively a mini-GP, with fewer laps and no pitstops, providing a preview to the main event, encouraging new F1® fans and offering greater entertainment over the racing weekend. Although the final placings of the Sprint Race have no impact on the final grid position, there are 8 points on offer for 1st place. The overall analysis of the Sprint Race times, illustrated in the plots below confirmed how the Red Bulls were able to control the race and maintain consistently faster laps. 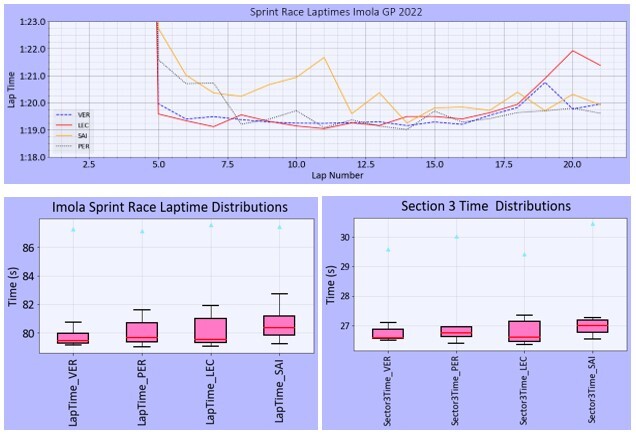 The only sector in which Ferrari was able to outperform the Red Bulls was the final sector 3, but it was only very marginal and not enough to compensate for Red Bull’s Sector 1 and Sector 2 gains.

Further analysis of the Sprint Race telemetry comparing fastest laps (for Verstappen lap 14, for Leclerc lap 11) suggests that although top speeds were very similar, the Ferrari was not as smooth as the Red Bull, requiring greater driver input for braking and throttle.

The Ferrari also appears to suffer significant porpoising on the longer faster straights resulting in an unbalanced car at the corner entry, requiring greater throttle input and control, especially in wet conditions. This is shown in the telemetry below, where Leclerc reduces speed before the braking points on the main straights, illustrated by the gradual rounding of the speed peaks. 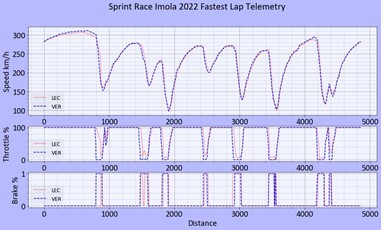 Whereas Verstappen was able to brake and accelerate cleanly throughout the corners, Leclerc appears to be battling the car and adjusting throttle through the corners.

In Sunday’s race, comparing the fastest laps for Leclerc and Verstappen in similar conditions, on the same compound tyre (though Leclerc’s fuel load was less on lap 63) reveals that the performance of Leclerc’s Ferrari is comparable to that of Verstappen’s Red Bull; 1:18.574s and 1:18.446s respectively. 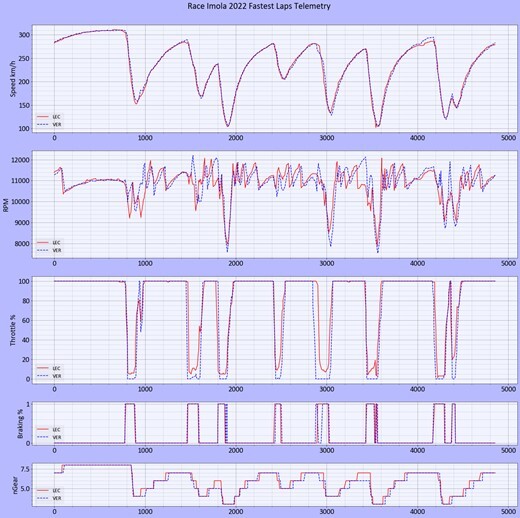 The rounding of the Ferrari’s top-end speed was not nearly as pronounced, although the feathering of the throttle is still apparent, suggesting that Ferrari is able to overcome the porpoising issue. However, Leclerc’s late gamble on the soft compound tyres didn’t pay off and cost him 3rd place podium finish and valuable championship points.

All in all, an action-packed and very satisfactory weekend for Red Bull who seem to have unequivocally moved the reliability problems that have plagued the team so far into the rear-view mirror. It has never been a question of performance, and Red Bull will now be relishing the Miami Grand Prix in May.

F1® confirm Russian GP will not be replaced for 2022 season

Alpine to make the call on Piastri and Alonso in July

What time does the 2022 Spanish GP start in Australia?