Max Verstappen extended his championship lead with an unlikely, yet emphatic victory at the 2022 Hungarian Grand Prix. The deck appeared to be stacked against a Red Bull victory; starting from 10th and 11th position on the grid on what is a high-downforce circuit that favours the Ferrari.

The Hungaroring has been described as “Monaco without walls” due to the narrow, sinuous nature of the track which makes it notoriously hard to overtake and it is often slippery due to the under-use of the circuit throughout the year. Verstappen would have been prepared for an exercise in damage limitation, yet with a combination of skill, a superior car and race craft, he managed to overtake and undercut his way to victory. A considerable element of Verstappen’s victory appears to be attributable to yet another poor strategy decision from Ferrari to equip Charles Leclerc with hard compound tyres when leading the race which caused him to bleed time disastrously.

Looking at the smoothed polynomial fitted plot of lap times shows the general trend of lap times over the race. It illustrates Verstappen’s consistency over the course of the race, especially at the beginning of his third stint, where Leclerc and Lewis Hamilton were consistently slower until both changed to the soft compound for the final stint.

Hamilton posited that a soft tyre compound rather than medium compounds at the beginning of the race may have made the Mercedes more competitive.

There are five different dry tyre compounds developed by Pirelli of varying hardness, ranging from the hardest C1 compound, which yields the greatest durability in terms of heat-resistance and extreme forces, to the softest C5 tyre, which is designed for high mechanical grip and peak performance. For each race, three compounds are allocated, depending on the nature of the circuit, in addition to intermediate and wet-weather tyres. Choosing the appropriate tyre is a compromise between grip and durability, though there can be the occasional anomaly where a compound performs beyond its expected parameters. Warm tyres soften with temperature and therefore grip better, with the optimal temperature for F1® tyres being around 100 °C.

The grip is critical for a Formula 1® car: the greater the grip, the greater ability to brake, accelerate and turn, which directly correlates to quicker lap times. The art of an F1® driver is finding the absolute limit of grip and maintaining it throughout the race. However, no matter the skill of the driver, the limit of grip is determined by three fundamental factors, all of which are related to the tyre:

The size of the contact path and vertical force is not affected by the choice of tyre compound. All F1® tyre compounds are the same size, and the vertical force through the tyre is based on downforce, weight, braking and cornering. However, the coefficient of friction between the tyre and the track is directly affected by the compound of the tyre, with the harder compound tyre less sticky and therefore slower.

Ferrari played the long game, gambling that the hard compound tyres would come good towards the end of the race after a difficult initial period bringing the tyres up to peak operating temperature. The F1-75 Ferrari is undoubtedly a quick car and appears to put heat into tyres quicker than the Red Bulls and Mercedes, but the plan backfired in the cooler track conditions, and Leclerc was subsequently fitted with softs.

A more detailed analysis of Leclerc’s telemetry certainly illustrates the underperformance of the hard compound tyre. Comparing laps 46 on the harder compound and lap 56 on the softer compound (similar tyre life) demonstrate the difference in pace, allowing for fuel correction. Leclerc can carry more speed through the corner and is faster on the exits, especially in the slow corners where the most time is lost, resulting in a massive 2% quicker lap time. 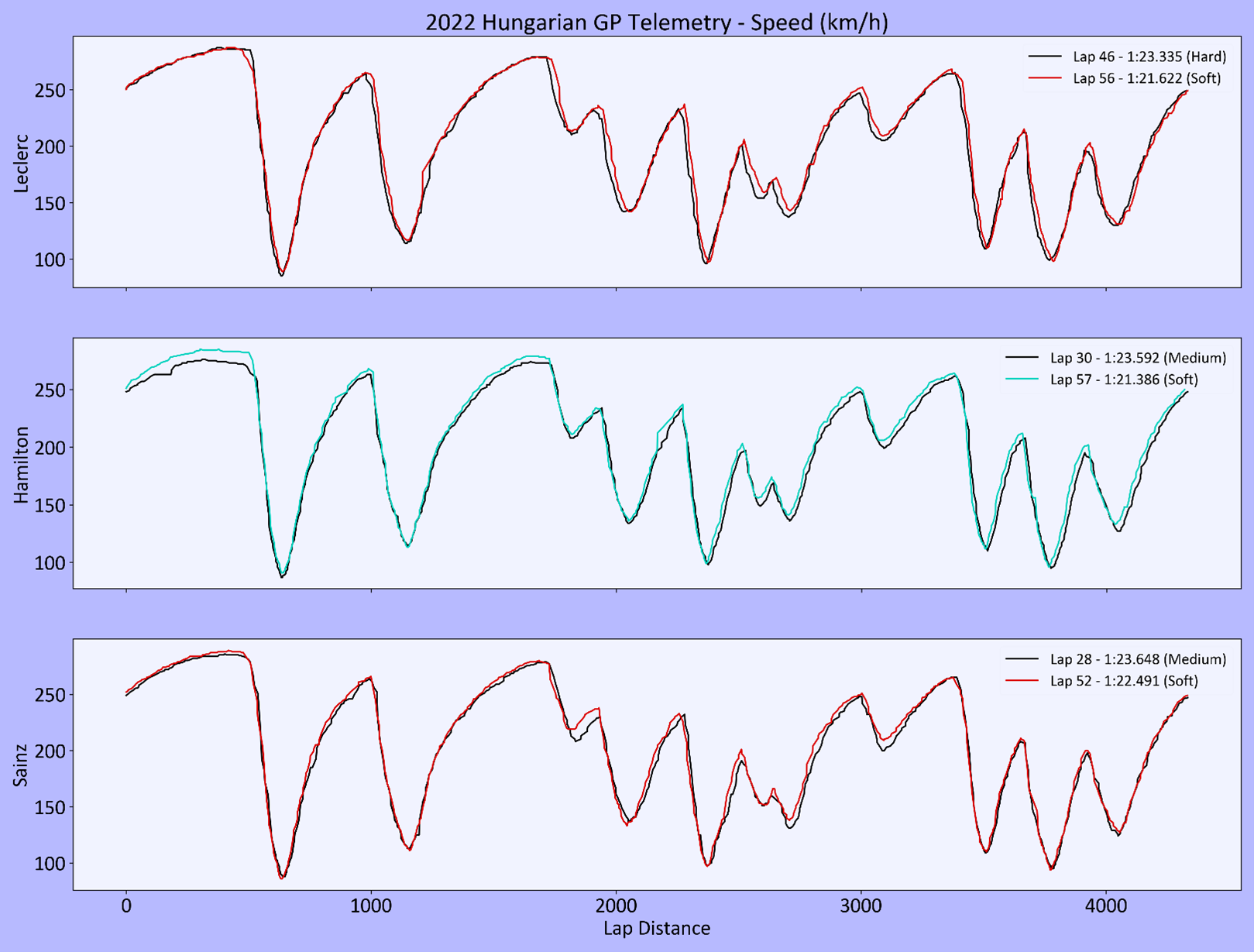 Ferrari team principal Mattia Binotto disputed the poor strategy judgement and claimed that the F1-75 Ferrari was off the pace, evidenced by Carlos Sainz’s average performance on the same Medium/Medium/Soft strategy as the Mercedes.

Certainly, looking at the comparative speed telemetry for Hamilton and Sainz’s performance between the medium and soft compounds on similar laps (similar tyre life, fuel load and no DRS) shows that Hamilton’s Mercedes was able to benefit considerably, with a 2.6% improvement in lap time compared to Sainz’s 1.4%.

Hamilton was able to improve his apex and exit speeds more than Sainz. It is difficult to deduce whether Ferrari became aware of this after the fact, but irrespectively, the choice of hard tyres when leading the race was bad optics. After being second and third on the grid running in qualifying with soft compound tyres and a light fuel load, Ferrari must have fancied their chances in the race. But looking at the respective performance of Sainz and Hamilton through box plots supports Binotto’s assertion that the Ferrari was struggling for pace. Hamilton’s Mercedes is consistently faster than Sainz in stints two and three, especially on the soft compound in the final stint where his median lap time is over a second quicker – a huge difference. 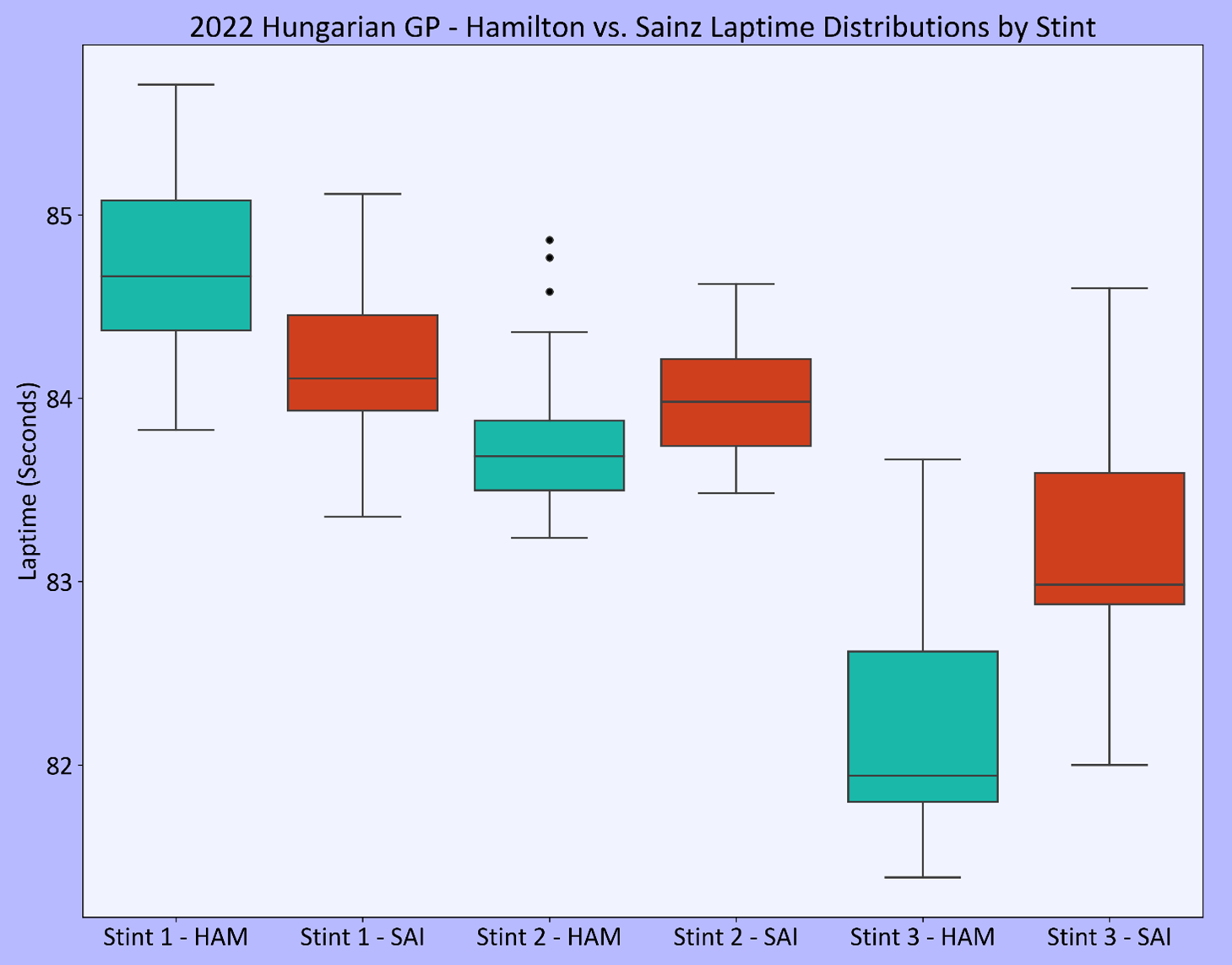 Verstappen’s championship lead of 80 points may look increasingly unassailable, but with Mercedes claiming a successive double podium, the Constructor’s Championship has suddenly become a three-horse race. The concern is that the Prancing Horse of Ferrari is taking a step in the wrong direction, with only 30 points separating them from a resurgent Mercedes in the fight for second place. Binotto and Ferrari will hope for huge improvements at Spa in four weeks at the fan favourite Belgian Grand Prix.

F1® mid-season mailbag: YOU ask the questions on In the Fast Lane