Yet another weekend dominated by Max Verstappen and Charles Leclerc - Verstappen and his Red Bull team celebrated a surprise victory at the inaugural Miami Grand Prix held at the Miami International Autodrome in Florida.

After a weekend fraught with mechanical problems, a Red Bull victory seemed unlikely after Ferrari locked out the front row of the grid with a strong performance from Leclerc and Carlos Sainz in Qualifying.

On paper, the Red Bulls appear better suited to the 19 turn street circuit, with its long front and back straights where power dominates. However, as analysed in previous posts, the Ferrari has greater speed through medium and slow speed corners, so it is a question of whether Ferrari’s gains on these parts of the track will outweigh the Red Bull's gains in the long, high-speed sectors.

Leclerc led comfortably from pole position and was able to build a small lead. However, starting from third on the grid, Verstappen was able to outmuscle Sainz through the first turn and then reel in Leclerc by lap eight, when he was able to use the Red Bull’s superior straight-line speed and DRS to pass a defenceless Leclerc on the long straight into turn one of lap nine.

Analysis of Verstappen and Leclerc’s lap times over the whole race shows how Verstappen was able to post successive quick laps early in the race. A polynomial fit of the lap times clearly illustrates Verstappen’s quicker lap times until Leclerc’s change from the medium to hard compound on lap 25 (LEC) with Verstappen 4.5 seconds ahead. After the pit stops the lap times were very close, with Leclerc marginally faster, but unable to pressure Verstappen consistently. Leclerc acknowledged after the race that the Red Bull was able to manage tyre wear better than the Ferrari.

Once the Red Bull had the freedom of the track and clean air, Verstappen was able to control the race despite the introduction of a late safety car that bunched the drivers up. Leclerc’s Ferrari got within DRS range but was unable to overcome the Red Bull leaving Max to claim his third win of the season’s five races and cut Leclerc’s championship lead from 27 to 19 points.

There were two critical moments that defined the outcome of the race. The first was Verstappen splitting the Ferraris of Sainz and Leclerc on the first lap, which enabled Verstappen to keep Leclerc within range. The second crucial moment was overtaking Leclerc on lap 9, where the Red Bull powered past the Ferrari down the start-finish straight. Analysis of the lap eight/nine telemetry shows the activation of the DRS coinciding with the huge speed advantage and the gap between the drivers rapidly decreasing along the long main straight. 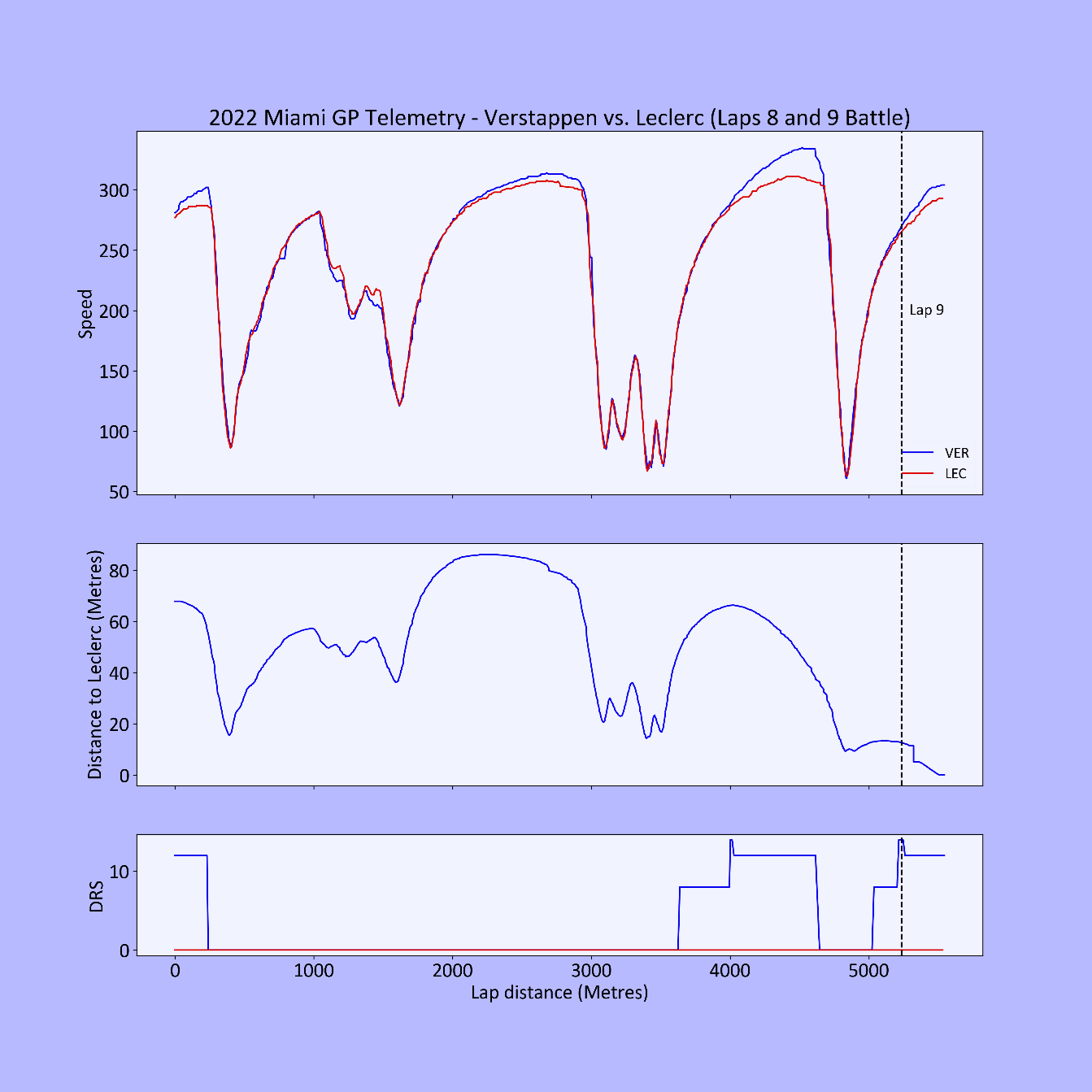 The delicately poised championship continues at the Spanish Grand Prix in a fortnight with Red Bull just six points behind Ferrari in the constructor’s championship and Verstappen slowly gaining on Leclerc.

F1® mid-season mailbag: YOU ask the questions on In the Fast Lane