Max Verstappen claimed victory at the Canadian Grand Prix, his sixth win for the 2022 season, beating a competitive Carlos Sainz in second and Lewis Hamilton completing the podium.

Having never previously won at the Circuit Gilles-Villeneuve circuit, Verstappen extended his championship lead over Sergio Perez, who suffered a gearbox issue on Lap 8, and Charles Leclerc, who finished in a creditable fifth place after starting from 19th on the grid due to an engine change penalty.

The Circuit Gilles-Villeneuve is a gruelling mix of slow corners and long straights. It is by far the toughest circuit on the calendar for brakes as drivers are decelerating from speeds of over 300 km/h plus to around 100 km/h on four occasions during the lap.

Teams usually opt to run a medium-to-low downforce package as high top speeds are crucial, but so is the good braking performance given that the car positioning at the apex is critical to maximising traction out of the corner.

For many years Formula 1® race results were dominated by qualifying performance and off-track passes through racing strategy: strategic undercuts, overcuts. This was due to the highly sophisticated aerodynamics used by F1® cars.

According to the F1® governing body, F1® cars lose approximately 35% of their downforce at three car lengths behind, and 47 per cent at one car length behind. A trailing driver needs to close in on a fast corner to slipstream the leading car on the straight and attempt a pass.

The Drag Reduction System (DRS) was introduced controversially in the 2011 season, which is a simple mechanism to flatten the rear wing and reduce drag by approximately 30%, providing a top speed increase of 12-16km/h thereby improving passing opportunities. DRS immediately led to record levels of overtaking and divides opinion as purists believe DRS detracts from the true driver skill.

Downforce is a key physical property in F1® engineering, it is a measure of the vertical load produced by air moving past the car bodywork: the front wing, rear wing, diffuser, underfloor, and barge boards. Greater downforce provides greater grip, car stability and cornering ability which usually translates to faster lap times, although this is complicated by the fact that greater downforce also reduces top speed. At top speed, the downforce created by an F1® car will far exceed its weight – approximately 1600kgs of downforce at 240km/h.

Major regulation changes to aerodynamics in 2022 were introduced to reduce dependency on DRS yet still maintain spectator engagement through wheel-to-wheel racing and on-track overtaking opportunities.

It is estimated that new rules promise to reduce downforce losses to just 4% at three car lengths behind, and 18% per cent at one car length behind. The idea is to promote aerodynamics which pushes the displaced wake up and over the trailing car and uses “ground effects” to replace lost downforce by sucking the car to the track through designs to the underfloor and diffuser. The bodywork is designed to produce a Venturi Effect such that high-pressure air at the front of the car flows to low pressure at the rear creating a pressure differential and therefore more downforce.

Some of the leading teams, such as Mercedes, have not adapted to the new regulations as well as others, experiencing severe performance and “porpoising” issues. However, the Canadian Grand Prix offered slivers of hope to the Mercedes team as they maintained contact with the leading teams and finally demonstrated competitive race pace as illustrated in the polynomial fitted plot of lap times below: 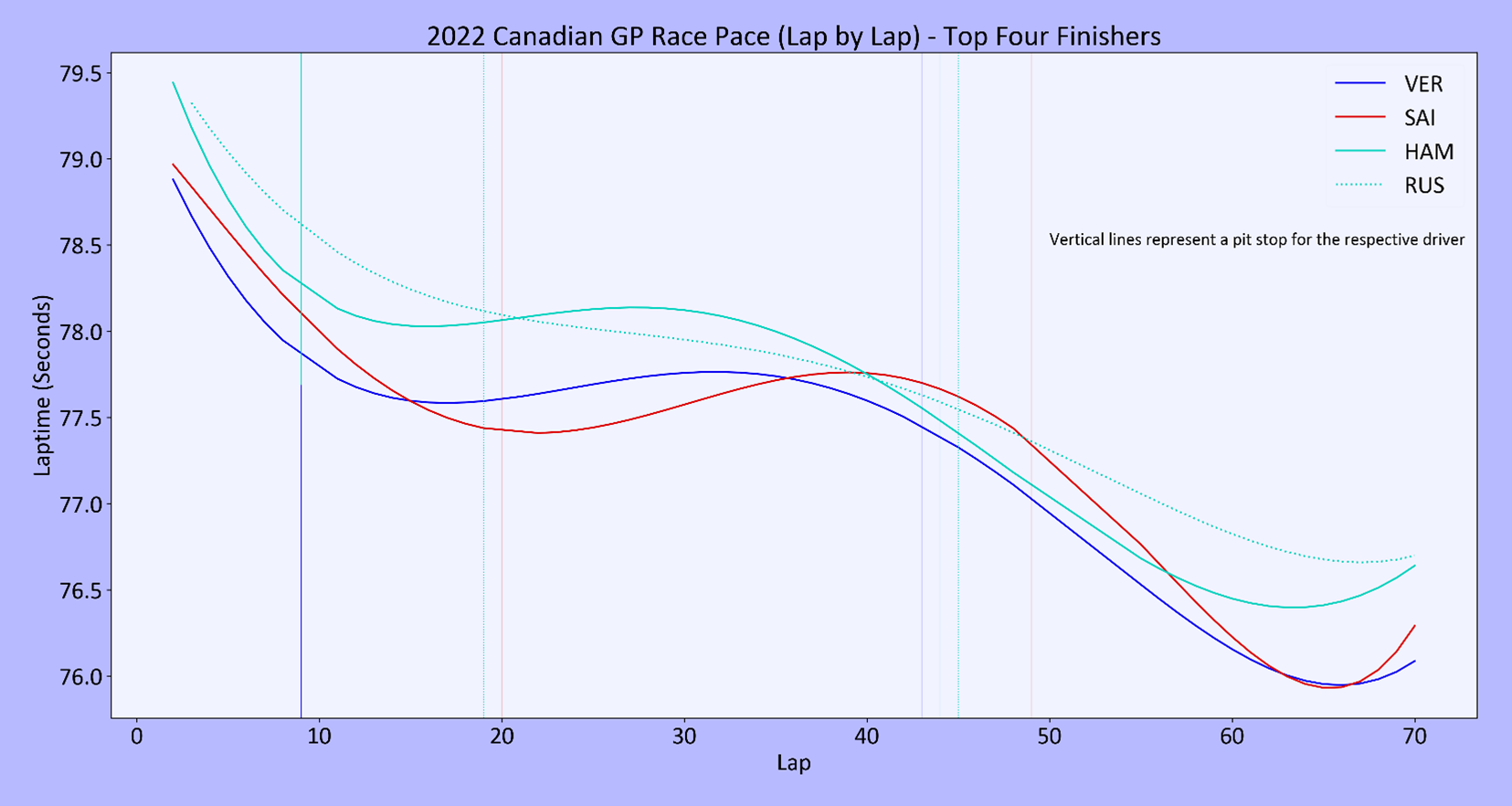 The Mercedes team also offered a contrast in a racing set-up which demonstrates the impact of downforce.

George Russell chose to increase the downforce of his rear wing compared to his teammate, Hamilton, which although improved rear grip, it came at the expense of top-end speed.

This is shown in the plot below which compares the fastest laps of Hamilton and Russell. Note that both drivers were using the same tyre compound, the lap times were posted at similar stages of the race (laps 63 and 69) with similar tyre life and fuel load, and no DRS was engaged during laps making for a fair comparison. 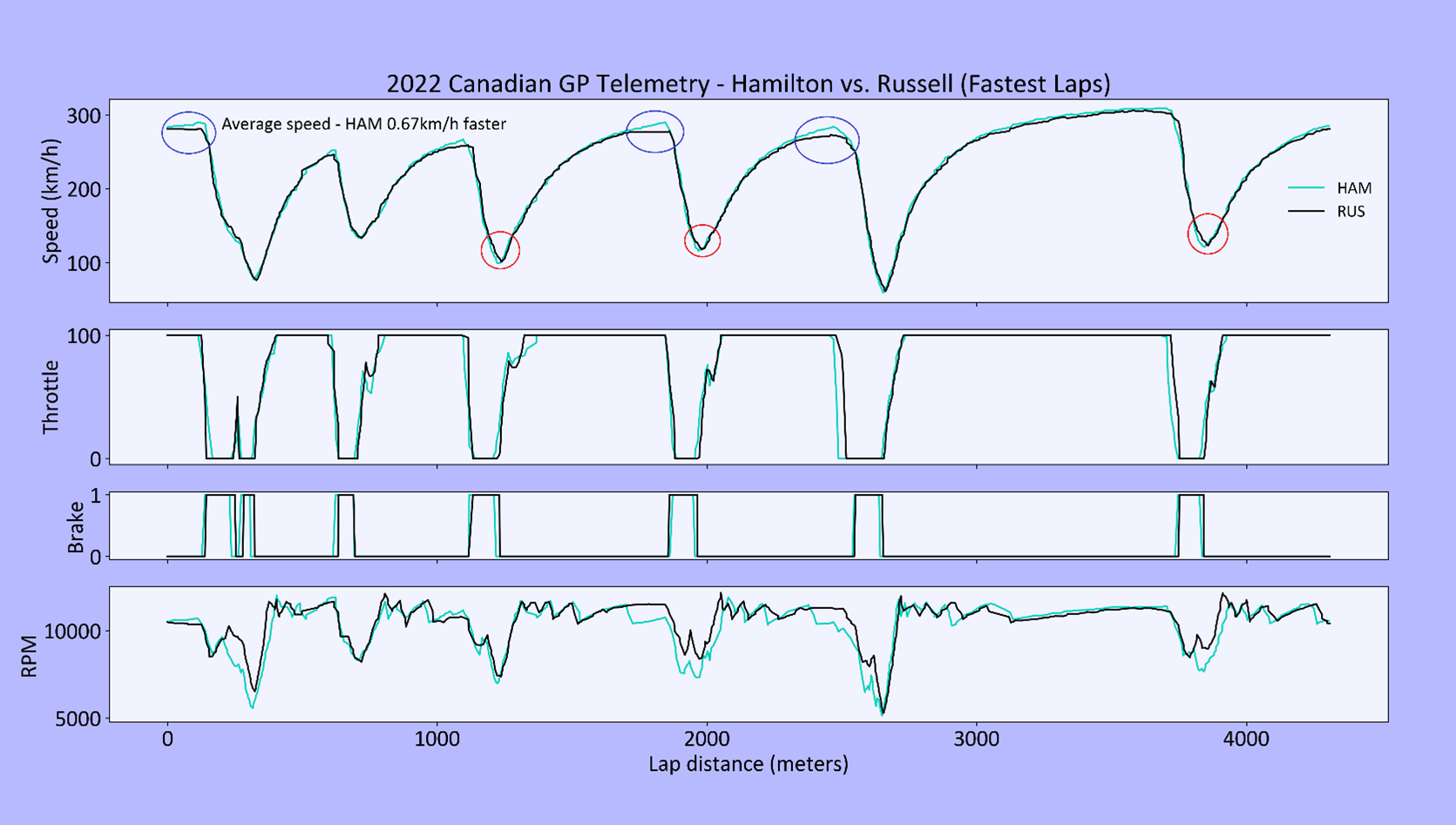 The telemetry also shows that Russell was able to consistently brake later and accelerate earlier than Hamilton, yet Hamilton was able to post the quicker lap time of 1:16.167 vs 1:16.418, some 0.677km/h faster overall.

This is also illustrated in the following plot of a comparison of mini sector speeds, showing which driver was the faster over the course of the circuit for their fastest laps. Hamilton dominates the straights, whereas Russell has the advantage in the corners.

One would expect the plot to show Russell faster in the low-speed hairpin, but the granularity of the plot is not sufficient to show that Hamilton is much faster leading into the corner, with Russell slightly faster at the slowest point but then Hamilton is a little bit faster on the exit of the hairpin. 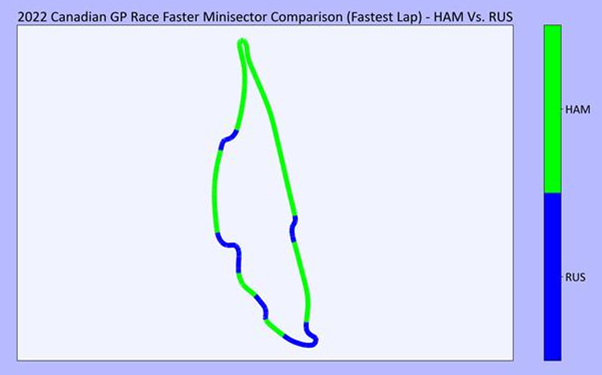 Russell recognized his error and explained:

“To be honest the track grip was far greater today than I expected. We took a bit of a risk and we thought with the track resetting after the rain yesterday, high degradation, the bigger wing would have been good."

“But I think with the change of wind direction, the grip was really strong today and I think one-stop could have actually been possible. So potentially in hindsight, it was over-winged but it wouldn’t have changed the overall result.”

Russell may have miscalculated this time, but he has managed to show great consistency by finishing in the top five in all nine races this year. He will be keen to continue his form in 2 weeks' time at the British Grand Prix at Silverstone, renowned for high-speed, high downforce sequences. Hopefully, he will have learnt from these mistakes and will find a better compromise between downforce and max speed.