An in-depth analysis of the F1® Azerbaijan GP 2022

Max Verstappen took home the victory at the Azerbaijan Grand Prix extending his World Championship lead. Verstappen’s teammate Sergio Perez came in second place to secure the third 1-2 finish of the season for Red Bull; George Russell rounded out the podium in third place. Meanwhile, Ferrari’s woes continued with both Charles Leclerc and Carlos Sainz being forced to retire due to mechanical issues. Ferrari’s failures and a race free of any crashes led to a relatively pedestrian afternoon when compared to the standards set by previous races at the Azerbaijan Grand Prix.

The Baku City Circuit is a high-speed street track with a combination of tight twisting turns, 90-degree corners and a start-finish straight that is 1.6 kilometres long, making it the longest straight on the F1® calendar. The unique composition of this track makes it a challenge for both drivers and teams to get the set-up of the car right. Interestingly, despite being a street circuit, most teams opt to go for a low-downforce setup here so they can maximise their top speeds on the long straight. With track temperatures of approximately 50°C, tyre and engine management were at the forefront of the driver’s minds.

Analysing the distribution of the maximum speeds of the top 10 drivers along the start-finish straight shows significant variation in top-end speed and consistency. The Alpine’s of Fernando Alonso and Esteban Ocon were blisteringly fast down the straight regularly recording exceptionally high speeds, meanwhile the Mercedes’ and McLaren’s both struggled comparatively down the straight. The points on the upper end represent the laps where the drivers benefited from DRS, indicating that Pierre Gasly, Fernando Alonso and Daniel Ricciardo were the biggest beneficiaries of the speed increase DRS provides. 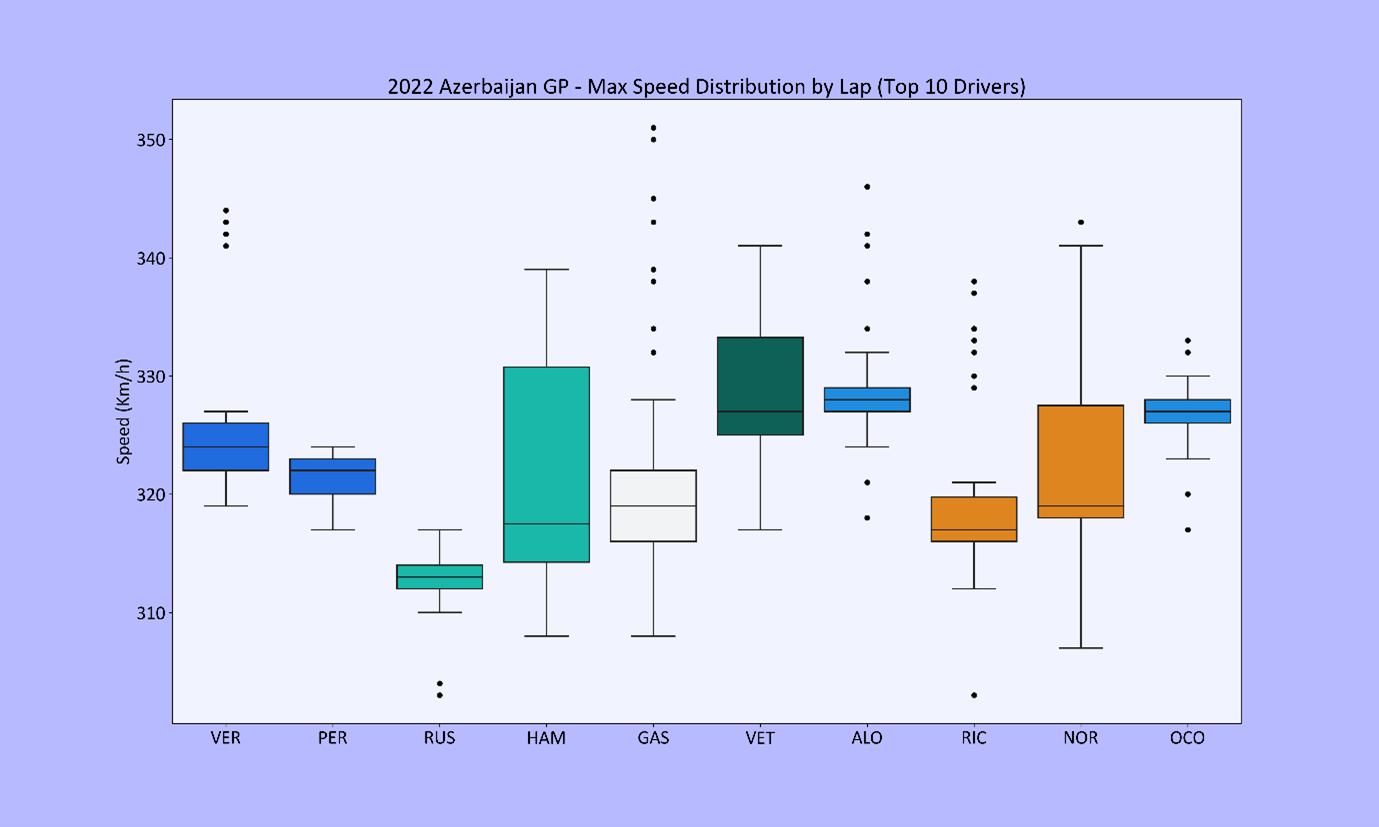 Given Red Bull’s emphatic and relatively effortless victory thanks to Ferrari’s debacle and Mercedes demonstrating that they were the next best team on the day, much of the action took place in the battle of the midfield. Only eight seconds separated Sebastian Vettel in 6th place and Lando Norris in 9th place.

There were tensions within McLaren throughout the race with Daniel Ricciardo having a better pace in the earlier stages of the race compared to his teammate Norris. Despite this, Ricciardo was asked not to pass Norris due to the two drivers being on different strategies. This ultimately didn’t work out for McLaren and Norris as his tyre wore out much quicker than his team had anticipated, allowing both Lewis Hamilton and Pierre Gasly to overtake him. Analysis of the race pace suggests that had Riccardo been given the orders to move ahead of Norris, it may have potentially been an even better result for the Australian, who finished 8th after starting the race 12th on the grid. In the final few laps of the race, Norris was given team orders to not pass Riccardo, in what many saw as a favour being returned for what happened earlier. 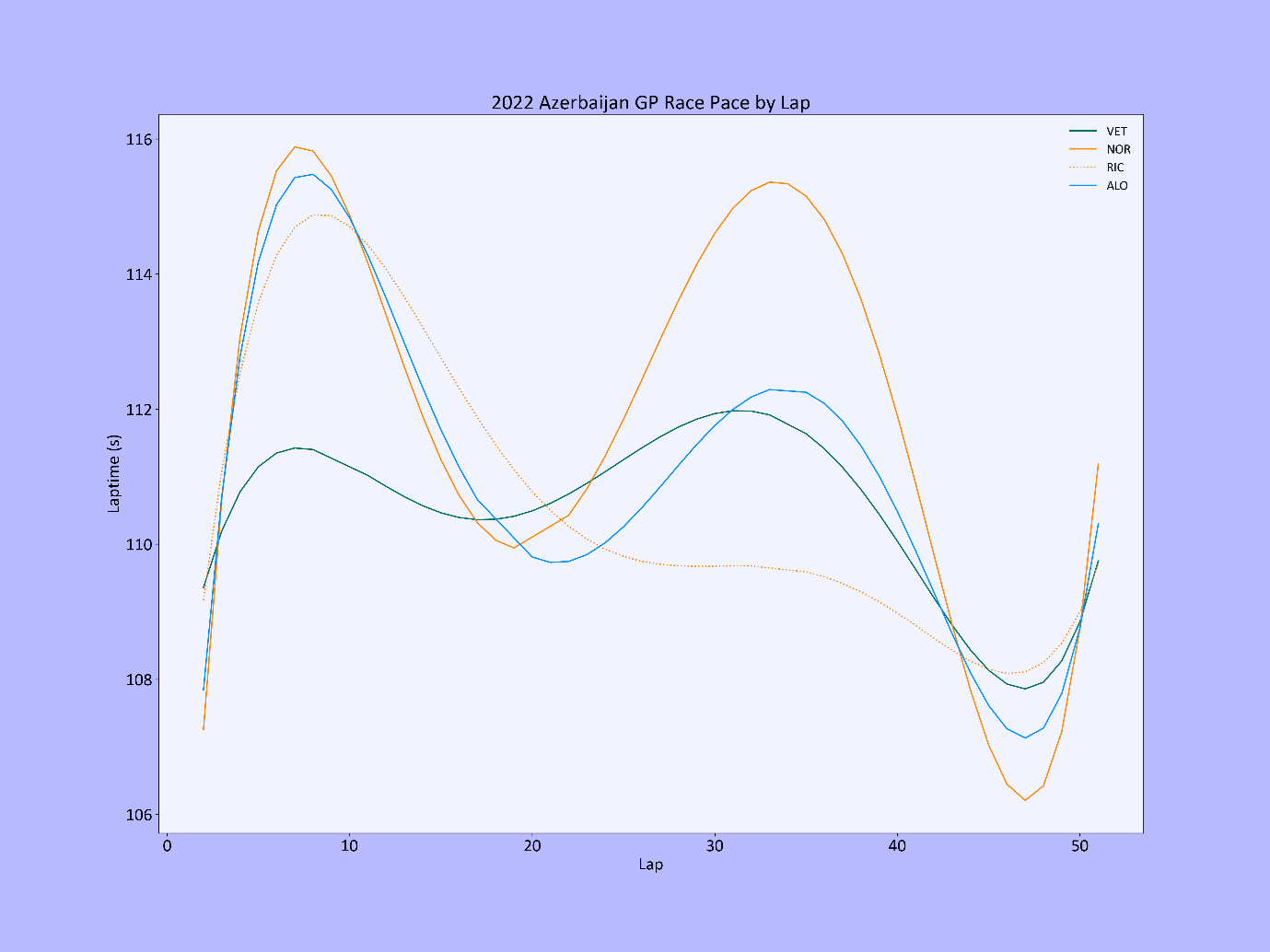 While McLaren was grappling with their race strategies and internal conflicts between their two drivers, Alonso was clocking extremely high speeds on the long straights with his maximum nearing 350 km/h allowing him to hold off any threat of being overtaken by either of the McLarens. Meanwhile, ahead of Alonso, Vettel had a terrific race and maximised the performance his Aston Martin provided, maintaining a solid pace from start to finish, and despite a lockup on lap 13, secured 6th place which is his best result of the season so far.

Leclerc now languishes in third place in the World Championship, 13 points behind Perez and 34 points behind leader Verstappen. With the additional retirements of the Ferrari-powered Alfa Romeo of Zhou Guanyu and Hass of Kevin Magnussen, the Scuderia have some serious work to do, and with the Canadian Grand Prix just one week away it may be a race against time.